The official ARC (App Runtime for Chrome) project, announced by Google in Google I/O 2014 enables running of Android apps on Chrome environment. The official ARC is available for Chrome OS only in the form of Extension. It is subsequently extended (or hacked, technically) by vladikoff and others into a general Chrome Extension ARChon that can be loaded onto a Chrome browser running on Windows, OS X and Linux. The ARChon is also complemented by a repackaging script, chromeos-apk which transforms an ordinary Android APK file into a loadable ARC app (also, a Chrome App).

Unlike the Android Emulator shipped with Android SDK or other commercial solutions (e.g. Genymotion), the goal of ARC is not to build another emulator that runs the full Android OS images and multiple apps. Instead, it aims at providing the minimum codebase to run a single app. Based on the analysis of files constitutes ARC implementation, it strips out all components unrelated to the Dalvik VM, and preserves the system libraries and the Android API framework. For example:

Source code of the ARC can be found at this link. However, this only allows you to build the .so libraries, a fully running system cannot currently be built. The following security evaluation work we have done is experimental and mainly for fun and learning. Source code for the experiments we conducted can be found on GitHub.

Through our experiments, we observed that ARC does not respect Android permission model , i.e., a repackaged app has access to privileged operations even without declaring corresponding permissions. You can compile run the TestPermission app in the the above GitHub link to confirm this issue. When running on ARC, the app has Internet access even without declaring <uses-permission android:name="android.permission.INTERNET" /> in its manifest file.

Given the issue, the first intuition is that ARC delegates permission checking to Chrome Runtime (together with permission enforcement for Chrome App). And I did found that the repackaging script adds every permission to the repackaged app, regardless of the actual permissions declared.

Following this approach, there are two difficulties to be overcome:

This file lists the permissions available for ARC environment with protection level=dangerous, extracted by the app AndroidPermissionProber.

Unfortunately, this process cannot be automated because it requires a lot of domain knowledge. Although similar in nature, the two permission models are not designed the same way, by the same team, or to be used in the same scenarios, which creates a lot of mismatch between these two models. Based on my experiments and understanding, I finally ended up with the following mapping:

Instrumenting the repackaging script to scan for Android permissions is trivial given the adbkit-apkreader library.

The above solution, although works in practice, might not be the best solution as it totally abandoned the GID/UID based permission model in Android OS. For example, an app with INTERNET permission is effectively being assigned with GID 3003. However, when we try to find the assigned GIDs for a no-permission app in ARC environment, we found that ARC assigns a lot more GIDs than necessary to the app!

For example, the same app TestAppID (without any permissions declared) is tested in ARC (left) as well as Android Emulator in Android SDK (right). It has normal GIDs in the Emulator but ARC assigns more GIDs (including GID 3003 representing INTERNET permission) to the app, which essentially allows the app to have INTERNET permission (as long as the outer Chrome permission allows).

I am currently unclear of the cause of this issue. I suspect that these GIDs are hard-coded into the ARC so that each app is automatically granted with these permissions. Such a design choice enables quick development and testing of core functions of ARC and reduces app crashes caused permission enforcement issues. However, this loophole, if not fixed, might grow to a more serious security issue once ARC gets popular. I believe it is worthwhile to have more investigations on this matter and fix it as soon as possible.

Inter-"component" interaction here refers to the potential interactions between ARC app and (1) other ARC apps, (2) other Chrome extensions and apps, (3) webpages, and (4) the underlying OS.

I have been trying to launch attacks against ARC app from outside of ARC environment but encountered little successes. Therefore, I came to the general conclusion that there is no particular advantage gained by attacking the ARC model, because of ARC being heavily sandboxed. 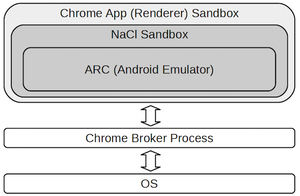 The intuition is that: in order for an ARC app to do any harm to other Chrome components (apps, extensions or webpages), it must break the NaCl sandbox and the Chrome app (renderer) sandbox. In other word, if there is a way that ARC app can leverage to break these sandboxes (for example, through JNI), it can always be translated to a break of Chrome app sandbox. Hence, there is no additional advantage gained by attacking Chrome from the ARC app.

In addition, following is a list of findings I have gained by experimenting with the ARC.