This section introduces the design details of the remote attestation service provided by Intel. 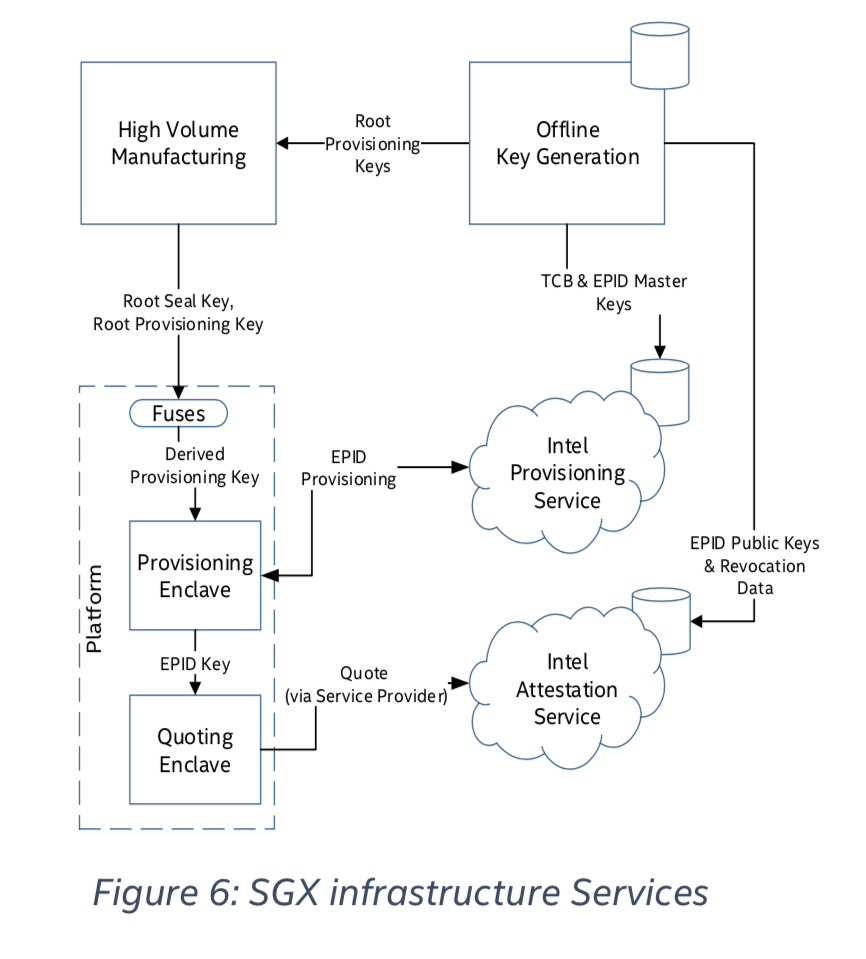 In order to transform a local REPORT into a remotely verifiable QUOTE, Quoting Enclave uses a platform unique asymmetric attestation key. The QUOTE can then be verified by a remote party using the corresponding public key.

So how does QE obtain this attestation key in the first place? In this tutorial we explain the provisioning process in which an SGX platform receives its remote attestation key.

Provisioning is the process by which an SGX device demonstrates to Intel its authenticity as well as its CPU SVN and other system components attributes, in order to receive an appropriate attestation key reflecting its SGX genuinely and TCB version. Normally, provisioning is done during platform initial setup phase, but re-provisioning can also be performed after purchase due to update to crucial system components such as firmware, BIOS or microcodes due to vulnerabilities. In such cases, the attestation key may be replaced to reflect platform renewed TCB security level.

The PvE is responsible for conducting the provisioning process on the platform against Intel’s online provisioning servers. In this process PvE demonstrates that is has a key that Intel put in a real SGX processor and in return, is provisioned with a unique platform attestation for future remote attestations. Both sides implement the EPID scheme join protocol; the PvE functions as a new joining member and Intel as the group membership issuer that issues new group membership credentials.

PvE proves its authenticity by using several SGX privileged key types which are accessible through EGETKEY instruction only by SGX architectural enclaves. Two of those keys are Provisioning Key (PK) and Provisioning Seal Key (PSK). The uniqueness of PvE and QE is based on their SIGSTRUCT certificates signed by Intel (MRSIGNER). Those enclaves are thus authorized to launch with privileged attributes in order to later obtain special keys by executing EGETKEY instruction.

Two phases are involved in the derivation process of PK. First, bind Root Provisioning Key to HW TCB. TCB key occurs during processors boot time by looping over PRF with the current platform SVN patch level which reflects platform’s firmware components. Second, add SW properties to the resulting PK. It occurs when EGETKEY is called and uses the TCB key as basis for derivation. PvE’s software elements are reflected by EGETKEY input parameters. Root Signing Key and Owner Epoch value are ignored in this case to render the same platform-specific key regardless of its current owner. The resulting PK is then a unique key that reflects both HW and SW components of the SGX platform. This process also minimizes the exposure of Root Provisioning Key.

After getting the PK, the platform can start the provisioning process to get the attestation key.

Once we have TCB specific PK, PvE generates two values to initiate the provisioning protocol. The first is a hash of the PK called Platform Provisioning ID (PPID). The second reflects the claimed TCB level based on current SVN. Both encrypted using IPS’s public key and sent to IPS.

Intel uses PPID to determine whether the platform has been previously provisioned. If so, an encrypted version of a previously generated attestation key is added to the server’s challenge. If not, the server determines the EPID group for that platform, and adds the EPID group parameters together with a liveliness nonce and a pre-computed TCB challenge to the message sent back to the platform.

Since all RPKs are stored by the offline Intel Key Generation Facility (iKGF), it can perform the same hardware and software TCB specific derivation process as performed by the PvE using EGETKEY (how to get SW attributes?) on every SGX device to produce its own provisioning key (how to know which SGX is which?). This PK is used to encrypt a random value to generate a platform specific TCB challenge. All pre-computed challenges are sent to Intel’s online servers to support the provisioning protocol.

To facilitate future attestation key retrieval service, the non-hidden membership key is encrypted by PvE using another special key, PSK. PSK derivation does not include the Owner Epoch and uses RSK as the root key for derivation. The PSK thus is not affected by the platform changing owners, and is exclusive to that specific platform.

If the platform has been formerly provisioned and the ongoing protocol is an attestation key retrieval or TCB update, the platform has to prove that it has never been revoked in the past. This is achieved by using PSK to decrypt the backed up attestation key copies obtained from the server, and using them to sign a selected message chosen by Intel.

Both the hidden and the encrypted EPID membership keys are sent, together with the TCB and non-revoked proofs.

After receiving the response, IPS first validates the TCB proof using the value received from iKGF and continues the EPID Join protocol on success. The hidden membership key is processed to create a unique certificate signed with the EPID group issuer key and stored together with the encrypted membership key for future re-provisioning events. The final message completing the protocol is then sent by the server containing the signed certificate.

Platform’s membership key together with the matching signed certificate form a unique EPID private key. Since the attestation key is constructed collaboratively by both parties, no one can forge a valid membership signature produced by the platform.

PvE encrypts the attestation key with PSK and stores on the platform for future use. Since EPID groups are categorized according to TCB levels, EPID signature can thus be user to represent both platform’s SGX genuineness and its TCB level.

Generally speaking, the goal of Remote Attestation is for a Hardware entity or a combination of Hardware and Software to gain the trust of a remote service provider, such that the service provider can confidently provide the client with the secrets requested. With Intel SGX, Remote Attestation software includes the application’s enclave, and the Intel-provided Quoting Enclave (QE) and Provisioning Enclave (PvE). The attestation Hardware is the Intel SGX enabled CPU. Remote attestation provides verification for three things: the application’s identity, its intactness (that it has not been tampered with), and that it is running securely within an enclave on an Intel SGX enabled platform.

Sigma is a protocol that includes a Diffie-Hellman key exchange, but also addresses the weaknesses of DH. The protocol Intel SGX uses differs from the regular Sigma protocol in that the Intel SGX platform uses Intel EPID to authenticate while the service provider uses Public Key Infrastructure (in regular Sigma, both parties use PKI). Finally, the Key Exchange libraries require the service provider to use an ECDSA, not an RSA, key pair in the authentication portion of the protocol and the libraries use ECDH for the actual key exchange.

As a result of this exchange between the client and the service provider, a shared key between the enclave and the challenger is produced that can be used for encrypting secrets that are to be provisioned in the enclave. Once inside the enclave, these secrets could then be decrypted by the application.

A method for exchanging keys over a public channel without leaking the actual key to other listeners. The cryptographic algorithm is explained here.

It is an extension to an existing Direct Anonymous Attestation (DAA) scheme with some additions, for example the use of SigRL (Signature Revocation List). EPID enables signing objects without leaving a trace that can be uniquely backtracked to the signer, making the signing process anonymous. This is done by dividing signers to groups (also known as EPID groups), based on their processor type. This way they create signatures with their own secret keys, but the signatures can be verified only with the public key of the group they belong to, making it possible to check that the signer belongs to the right group, but impossible to uniquely identify the signer.

An entity responsible for protecting the secret provisioned to the enclave (both software and hardware).

A special enclave on every SQX processor and is tasked entirely with handling the remote attestation. It receives REPORTs from other enclaves, verifies them and signs them with the attestation key before returning the result, also known as a QUOTE, to the application.

Relying parties are referred to as service providers and do not have to hold SGX enabled hardware. Service providers are expected to register to the IAS and meet a set of Intel defined requirements in order to submit attestation evidence for IAS verification. This registration binds service providers’ Transport Layer Security (TLS) certificate to a unique Service Provider ID (SPID), and permits access to the IAS services. Some of these main IAS services are: verifying ISV enclave Quotes, requesting updated attestation revocation lists and retrieving the assertion information history associated with a Quote.

The QE supports two Quote signature modes with different link-ability properties, Fully-anonymous and Pseudonymous Quotes. The link-ability property of a Quote is determined by a basename parameter signed using platform’s unique attestation key. Using the same attestation key to sign the same basename parameter multiple times yields pseudonymous Quotes that are easily linkable. This mode is used by service providers to keep track of revisiting users and protect against sybil attacks, while preserving user’s privacy. When a pseudonymous Quote is used, the IAS first validates that the basename used is associated to that specific service provider. This role of the IAS enforces user’s pseudonymous separation between different service providers. In contrast, by signing multiple signatures on different basenames, it is computationally infeasible to determine whether the Quotes were produced using the same attestation key or not, thus preserving platform’s anonymity. Therefore random basenames are used by the QE to sign Fully-anonymous Quotes.

There are mainly three platforms involved in Remote Attestation: